Kelsey at the Movies 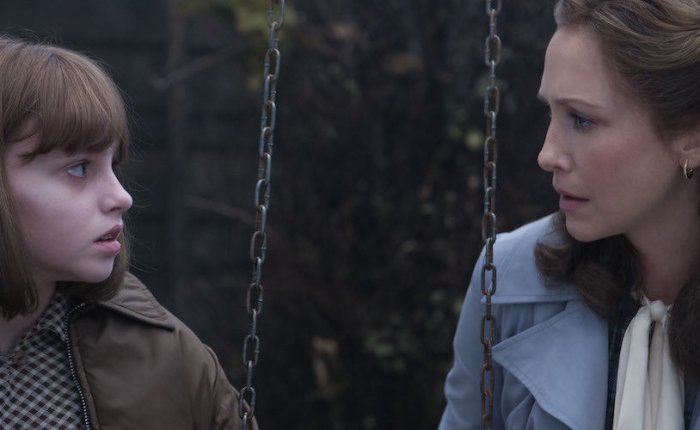 The Conjuring constituted something of a cultural phenomenon. As horror films go, it was high-budget, star-studded (Vera Farmiga, Patrick Wilson, and others), and enjoyed the lowest common denominator of being embraced by fans and receiving something resembling critical attention. It’s not that it was original: it took its cues from a mixture of haunting movies (pretty much anything with “Amityville” in the title) and demonic possession movies (pretty much anything with “exorcism” in the title). The language of The Conjuring combined multiple genres: the animation of banal objects, the ventriloquism of otherwise sweet children, the creepiness of the literal house (following a large body of horror films for which Clover’s “the terrible place” is the domestic space), and, quite liberally, shots of scary, gangrenous, ghostly faces, if only for a frame or too. The Conjuring failed to accomplish the dictates of truly good horror (this year’s The Witch brought about interesting meditations on feminine coming-of-age as well as the entire script of good femininity, while 10 Cloverfield Lane dealt with kidnapping, confinement, and apocalypse rendered with staggering ingenuity… last year’s It Follows deployed issues of adolescent sex, and the list of thematically saturated horror goes on), but it did manage the ultimate goal: to be really fucking scary. When I screened it in my living room, I involuntarily screamed, audible genuine screams. 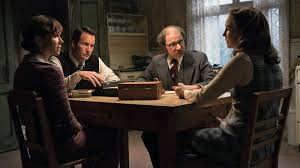 The Conjuring 2 basically follows the same format as its predecessor. The first horror elements come from the animation of different toys and household objects: an empty swing swinging, an empty chair rocking, a toy fire truck turning on seemingly by itself. Soon enough, a sweet girl becomes fodder for demonic puppetry. Finally, jump scares–mostly in the form of creepy faces accompanied by crescendoes in the score and sound mixing–abound in every corner. Unlike The Conjuring, The Conjuring 2 gets tripped up in telling two narratives in parallel for the first half of the film. The Conjuring 2 maintains its connection to the first film by introducing us to the life and times of Ed (Patrick Wilson) and Lorraine (Vera Farmiga) Warren, the home-exorcism experts of the Amityville horror we witnessed in the first film. We switch back and forth between the Warrens, and a british family, the Hodgens, victims of a London haunting. While their Hodgens story is much more compelling, we’re frequently brought back to the Warrens as Lorraine grows hysterical about a vision that continues to haunt her from one of the Warrens’ cases. Lorraine tries desperately to convince Ed that it’s time for the two to get out of the haunting game, but, when the Hodgens’ haunting is brought to their attention, the Warrens decide to take one more case before retirement.

The Conjuring 2 manages to leverage scores of jump scares before the nuts and bolts of the plot even get doled out, which works in its favor. But, by an hour into the run time, when audience adrenaline and heart rates have been turned up to 11, The Conjuring 2 gets tripped up in explaining an excessively complicated plot behind the haunting, but without any particularly revelational twist. Because the actual plot is entirely unfascinating, I’m going to spoil it in the review: several spirits (The Crooked Man, a character from the Hodgens’ children’s zoetrope toy, an old man who died in the house, and a few others), who have intermittently haunted the family, were really just serving as decoys for this OTHER demon that can be condemned back to hell if you invoke its name, which Lorraine does at a crucial climax, recalling that she’d learned the demon’s name in a vision earlier in the film. Oy! It’s complicated, and boring. It’s far from a satisfying story, and the final revelation (the demon’s name) hardly constitutes an unexpected twist (a la the family was dead the whole time, the events were all told through an unreliable subjectivity, the culprit was someone unexpected, etc. etc.) though the film begs audiences to see it this way. The hour-or-so portion of the film devoted to getting this plot out is nothing short of laborious, and every time Lorraine Warren has a “eureka” moment that may allow her to defeat the baddie  by the end, it’s impossible not to roll one’s eyes.

Not to mention, that the whole plot lacks any real thematic meat. In fact, if there’s anything to be gleaned, ideologically from the film, it’s a pretty overt religious project: the demons in both the films, and the religious impulses of the Warren family, only serve to confirm and uphold the ideologies and beliefs of the Christian faith, which is a far-from-haunting final takeaway, and rings ultimately as cheesy, cloying and contrived. But, what’s worse, is that the plot and abject Christianity of the film, bog the film down from doing what it could truly excel at: scaring the shit out of you. The scary elements are cheap as hell: the opportunities for jump scares are exploited indiscriminately, left and right. It’s not to say that these aren’t rendered in new and exciting ways (one of the scariest moments of the film, actually, is merely a cut after which the ventriloquized Hodgens girl appears directly next to her older sister’s bed, seemingly having teleported, albeit across the cut, a moment which hardly registers as “done” or “trope-y”). The film even directly confronts a number of horror tropes (we see a shot of the entire family running out of the house after an incident, seeming to answer the audience’s most burning question through the ages: “Why wouldn’t you just leave the house?”)

So, it’s not to say there isn’t some cleverness in the language of The Conjuring 2, merely that the opportunities to scare audiences mostly take the form of shock and surprise. They’re cheap! And there’s nothing wrong with that–horror audiences crave the adrenaline rush of filmic terror, and if this rush can be pulled off without campy bad-acting, even better. But these requirements make up a great valley of horror, being that most horror is either not-scary or so badly written and executed that it’s unwatchable, except maybe as ironic camp, ultimately catapulting the original object into the comedy genre, unintentionally. Here sits The Conjuring saga on a gold mine, but the second film insists on having a convoluted plot in order to lead to cinching revelations.

The film manages to be sincerely frightening. It should just stick with that: an hour and a half of shameless jump scares, and a simple, concise exorcism to introduce closure. As long as the plot it proposes is total garbage, it may as well succeed at what it does best. Even if this were to produce a contrived or silly ending, it could hardly be worse than what the film ultimately proposes.